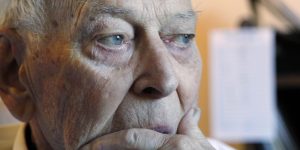 Financial exploitation continues to be one of the fastest growing forms of abuse targeting older adults. Our Senior Protection Program and FAST team learn about new cases daily. Kevin* is an 87-year old widower, who learned about financial fraud the hard way.

Kevin received a phone call at home from a computer repair company that he had done business with last year. He was advised the $500 maintenance and repair fee he paid was going to be refunded due to the company closing. The woman who contacted Kevin told him someone would be calling to process the $500 refund. This was the beginning of a very deceptive and manipulative scam, and Kevin had no idea.

Kevin considered himself financially savvy and independent, but he had just lost his wife and was undergoing a grief therapy program and his cognitive abilities had declined under the stress. Subsequently, a man called from the computer repair company and identified himself as “Tim.” Tim convinced Kevin that in order to get the $500 refund, Kevin needed to share his home computer screen remotely. Tim began to coach Kevin on how to share his computer, and a form appeared on his screen which included a fill-in-the-blank field that he was instructed to complete and indicate that $500 was to be refunded.

As soon as Kevin punched in $500, the screen blacked out and updated the refund amount to $5,000. Kevin quickly tried to correct it, thinking he had made the error. Tim launched into an emotional outburst saying he was going to lose his job because of the money and needed to fix it immediately, he then remotely took over Kevin’s computer and somehow made another mistake and placed a $20,000 refund into Kevin’s checking account. Or so Kevin was led to believe. Tim instructed Kevin to check his balance, and strangely enough, there was $20,000 in his checking account that had just been deposited.

Tim then explained that the only way to correct this error was for Kevin to return the money immediately. He needed to withdraw two $10,000 cashier’s checks and deposit them into two different banking accounts – for which Tim had the account information. At this point, Kevin was confused and upset. He wanted to rectify this terrible mistake and did as he was instructed. Kevin pulled out the $20,000, getting two separate cashier’s checks, and went to the nearest bank branches and deposited them into the requested accounts.

Kevin came home from the bank and checked his account balances online again. This is when Kevin realized he was now missing $20,000 from his savings account. When Tim had remotely controlled Kevin’s computer, he secretly accessed and transferred $20,000 from Kevin’s savings account into his checking account without Kevin knowing. Tim had made it appear that the mysterious $20,000 refund deposit that Kevin had received was mistakenly from the computer repair company and needed to be returned immediately or he would lose his job.

In reality, Kevin had just withdrawn money from his own savings account and deposited it into accounts owned by people he had never met. Kevin had been scammed out of $20,000.

Kevin frantically called his bank’s fraud center and reported what happened. Despite reporting the fraud to his bank and completing the bank’s fraud process, he was told that the bank did not see themselves as responsible for reimbursing Kevin’s money. Kevin managed his own financial affairs, he used online banking and was therefore not a novice to this technology, he requested cashier’s checks and deposited those checks into other banks. There was just no corroborating evidence to support Kevin’s claim of fraud to justify a bank refund. Kevin was at first distraught. Then he got motivated and contacted our Senior Protection Program.

After reviewing the case we were able to assist an Investigator in the Orange County Sheriff’s Department Cyber Crimes Detail unit. We provided documentation that allowed both banks to be subpoenaed under a criminal investigation and the accounts of the persons who received the funds were frozen. Search warrants were then delivered to each bank to further the investigation. As this case is ongoing, we are hopeful to recover at least some of the money that was stolen from Kevin.

It is very difficult to stop financial abuse, largely because it goes unreported. The Senior Protection Program mission is to educate older and disabled adults to recognize fraudulent activity and report it. Together, we can fight this incessant crime. We encourage everyone to educate and empower themselves to learn how to identify financial abuse so they can stop it before it happens.

Struggles like Kevin’s happen more often than one could imagine and no one is immune.   Help the Council on Aging – Southern California educate and empower older adults like Kevin. We can make our community a better place, and we can protect the lives of older and disabled adults together.

If you found this story inspiring, please consider making a donation to help the Council on Aging – Southern California continue to help older adults like Kevin and the many more in our community who need our support.